The release date of actor Akshay Kumar's much-awaited film 'Sooryavanshi' has become a lottery number in the film industry these days. In the new year, there have been frequent discussions about its release date. Now, in a meeting of the film's producers and its investors on Wednesday evening, it has been decided to release it on 30 April. Meanwhile, the release dates of the Hollywood film 'Godzilla vs Kong' and Kunal Kapoor, Eli Avram starrer 'Koi Jaane Naa have also changed.

The film 'Ruhi', which was released on Mahashivratri, has a positive impact in the film industry due to the excitement of the audience on the release of about two thousand screens and its booking. After seeing the data on the booking of 'Roohi' on Wednesday, the makers, investors, and distributors of the film 'Sooryavanshi' have formed an opinion on the release of the film on the last Friday of the next month i.e. 30 April. In this regard, a message has been given to all distributors of the country to stop screens accordingly.

The film industry was also constantly getting the wrong message due to the postponement of the release of the film 'Sooryavanshi'. Discussions were even taking place that Reliance Entertainment might not be convinced about its film. Whereas, people who have seen the first copy of the film are calling it a Rohit Shetty-style bang movie. The presence of Ranveer Singh and Ajay Devgan along with Akshay Kumar in the film is also expected to benefit from the box office.

Along with the release date of 'Sooryavanshi', the news is that Hollywood company Warner Bros. has now released its film 'Godzilla Versus Kong' in India, two days before the predetermined date of March 26, ie on March 24. Has decided. In the US, the film will be released on 31 March. On the other hand, the T series has shifted the release date of director Amin Haji's film 'Koi Jaane Naa from April 26 to April 2.

Sooryavanshi is a Bollywood action thriller released in 2021, directed by Rohit Shetty. According to reports, Akshay Kumar will be seen in the role of ATS officer in the film. Apart from this, in this film, Abhimanyu Singh will be playing the role of Villan, while Katrina Kaif will appear opposite Akshay. 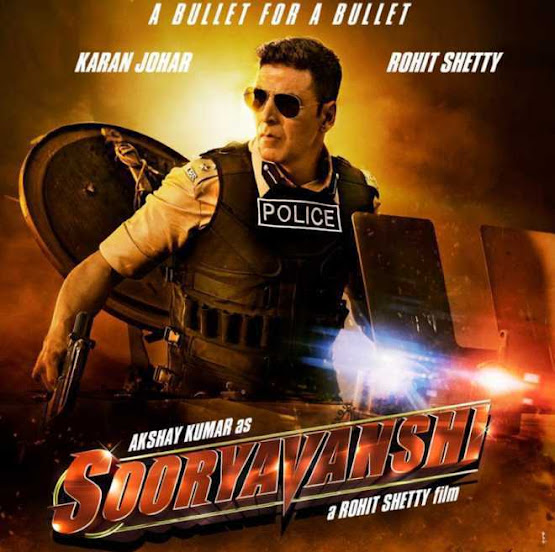 The story of this film is based on the terrorist attack on Mumbai. An attack plan is being carried out by the Lashkaris on Mumbai, the responsibility of stopping, a warrior of the Mumbai anti-tarism Scott named Sooryavanshi. To stop the attack on Mumbai, Sooryavanshi, Simba, and Singham all apply their full strength. A major fight of these three officers is against the terrorist organization which is about to attack the city of Mumbai.

At this time, the threat of the coronavirus is being seen everywhere, the effect of the corona is also being seen in Bollywood films. The film Sooryavanshi was scheduled to be released in theaters on March 24, 2020, but due to the outbreak of Corona, the release date of this film has gone ahead. On 12 March 2020, Rohit Shetty, in his Twitter account, has released an official statement to forward the date of the film. It is being told that the first song of the film was also canceled due to the epidemic.

Sooryavanshi will now be released next year in 2021.