· The film Mumbai Saga of John Abraham and Emraan Hashmi has been released.

· This is the biggest film to be released after the Corona epidemic.

A LION amongst the Wolves!
Amartya is born to Rule!

The conspiracy is hatched, but can anyone stop Amartya's Rise to claim Mumbai as his own.
It's a war for Dominance!https://t.co/oxASWTVo65#MumbaiSaga IN CINEMAS TOMORROW.@emraanhashmi @_SanjayGupta #BhushanKumar pic.twitter.com/NzqumPjxkL

Such is the story

The film shows John Abraham committing several crimes to establish his supremacy and pushes a well-known industrialist on the road. After that, it is announced that the policeman who shoots them in the head will get a reward of 10 crores. Then comes Emraan Hashmi and his motive is to kill John. "Time comes everyone, my time will come", Says Armatya Rao (John Abraham) in a barrack of the prison to his enemy Gaidonde (Amol Gupte). Together with the three friends, Armitya soon emerges as a new gangster from Bombay... His rule runs from Dadar to Byculla. But in the meantime, the entry is that of specialist Inspector Vijay Sawarkar (Emraan Hashmi).

The characters seem inspired by them

In the film, there is a character inspired by Balasaheb Thackeray, Bhau (Mahesh Manjrekar) .. who says in his gathering - "Mumba Devi's city is Yeh, Hamari Aayi. So from today, the city will be named Mumbai .." Movie 80 The decade is based on the world of Mumbai's underworld. Amrita Rao's character is based on Mumbai gangster DK Rao. DK Rao was once Chhota Rajan's right hand. DK Rao was saved in the police encounter not once or thrice. DK Rao's real name is also Ravi Mallesh Vora. Ravi Mallesh, born in Chawl in the Matunga area, became DK Rao in the 80s. DK Rao used to beg ransom, rob bank, kill, threaten Don Chhota Rajan. DK Rao has enmity with Dawood Ibrahim. Dawood Ibrahim is behind DK Rao. At the same time, Chhota Rajan was separated from DK Rao after he was deported to India. He formed his gang.

Director Sanjay Gupta had earlier given a great film like Kabil (2017) but he could not give anything new in this film. Not a single suspense works in the film. However, John Abraham leaves his influence in the role of gangster Armtya Rao and Emraan Hashmi also plays his part. Apart from these, two more powerful characters are seen, Mahesh Manjrekar and Rohit Roy. The film's actress Kajal Aggarwal had few dialogues, so she could not show much effect. 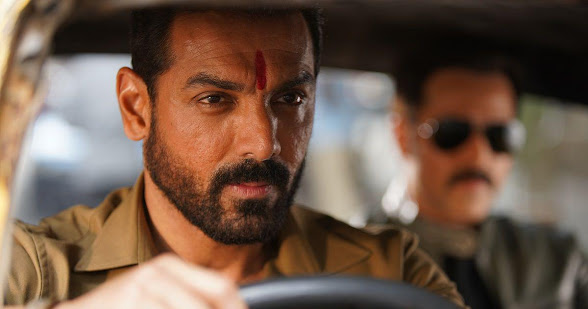 If you are a fan of director Sanjay Gupta's underworld crime cinema and you enjoy John Abraham's bone-breaking action, then this film will be liked. There is no newness in this story of 1980s Bombay. Style and dialogue if anything. It is important not to use the mind while watching the film.

There are two types of people living in Mumbai. Week-end collectors and week-end collectors. In this game of week-taking, criminals, police, politicians, and industrialists throw dice and pieces by making the metro into a ludo. When, who will beat whom and with whom they will beat anyone, cannot say. The puzzle of the outburst of criminals, police, politicians, and industrialists is in the news these days after a car full of explosives was found outside Mukesh Ambani's house Antila. It is clear that even though the name of the largest metro in the country has changed from Bombay to Mumbai in the last decades, Taseer has not changed. This is the reason why producer-director Sanjay Gupta's film may tell the story of 1980s Bombay, but he has named it Mumbai Saga.

Underworld crime stories like Sanjay Gupta's Atish (1994), Kaante (2002), Shoot Out at Lokhandwala (2007) and Shootout at Wadala (2013) were liked by the audience. The Mumbai Saga is the sequel to this. Believe their claim based on true events, the Mumbai Saga is inspired by the lives of famous brothers Amar Naik and Ashwin Naik of the underworld. But he also says that the characters are fictional. Amartya Rao (John Abraham), a family who sells vegetables at the railway station, and Gaitonde (Amol Gupte), a week-long recluse, get mad when Gaitonde's goons make bad friends of Amartya's younger brother Arjun. Amartya declares that from now on, no one will give weeks to goons.

He alone beats fifty-fifty goons, picks-up, and bangs them. His hands and feet and face go to jail and even escapes from under Gaitonde's nose. Leader Bhau (Mahesh Manjrekar), who rules Mumbai, is now on Amartya's head and by the time he gets transformed into the underworld. After this, Amartya-Gaitonde's rivalry, on the behest of Bhau by Amartya's murder of mill owner-industrialist Sunil Khaitan (Sameer Soni) in broad daylight and the announcement of a reward of Rs 10 crore for Khaitan's wife's whereabouts to the killer, Inspector Vijay Savarkar (Imran Hashmi) 's entry gives full Bollywood color to the story. The film is divided into two parts. Before Vijay's arrival and after Vijay's arrival.

In a sense, there is no newness in the story. All things have been seen before in Bollywood and Sanjay Gupta's films. The yellow-green color tone of the film is also similar to his old action-crime stories here. The style of criminal-heroes is as stylish as ever. Their dialogue and action attract attention. In such a situation, if you see without spending your mind, you will like Mumbai Saga. Sanjay Gupta's films have a different blueprint and his fans like it the same. When Sanjay came out of the purview of Mumbai-crime fiction, the fans rejected his films. His previous film Kaabil (2017) proved to be average in the presence of a star like Hrithik Roshan. In such a situation, Gupta again plunged into the old ground. However, compared to his previous crime-action films, the Mumbai Saga is weak.